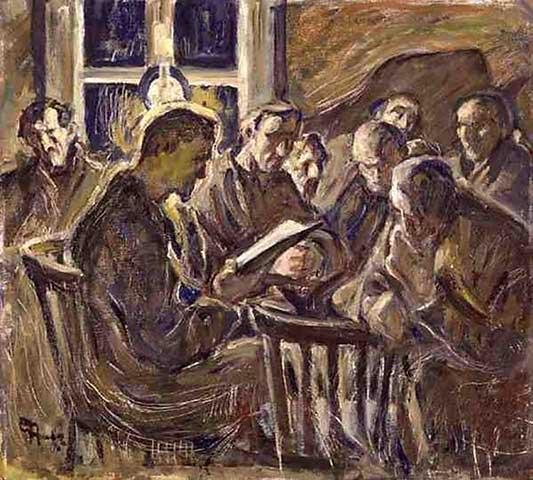 “Sammankomsten” (“The Meeting”), oil painting by Ester Almqvist, original at the Swedish National Museum. The painting was chosen by the UN as a motif for a stamp commemorating the establishment of the Universal Declaration of Human Rights, paragraph 20: the Right of Assembly – Wikipedia

The question, beginning back in June in the wake of the Solidarity March for Black Lives Matter, remains: “What can a poor boy do”?

There is no end of things that can be done to make this beleaguered world a better place. And there is no shortage of “human resources” (what a repulsive term) to do the work: 7.94 billion of us and counting.

Some of us are old or otherwise slowed for work; some are sick or otherwise incapacitated, and some are busy growing and learning, but that leaves what must be an inexhaustable reservoir of minds, hearts, hands, bodies, and imaginations to do what needs to be done.

To get started, the best move for any one of us facing the question of what to do as an individual would be to start or join an association of some kind: a company.

The fact is, there is almost nothing you or I can accomplish alone. Even a rock’n’roll band is an organization of sorts.

It doesn’t have to be official. You don’t always need a license, a charter, or corporate status. A secret sect, a personal cult or a street gang is a company of sorts.

But informal arrangements have limitations. Without rules, leadership is usually by force of character or personality. A formal organization with all the proper understandings in place can smooth processes, expand capabilities, and limit bullying.

I’m inclined to agree with Margaret Thatcher: There is no such thing as “society.” Not as an abstraction, anyway, as utilized by social scientists, economists and the like.

Such categories tend to bypass, if not erase, many of the peculiarities of what humans do, alone or in company. The aim of social science is primarily mastery, whether for our own good or to fit us into some system or other.

There may be no such thing as an actual, tangible “society” as such. There are, however, a breathtaking variety of what I’ll call organisms — collectivities that evolve out of particular circumstances in an unplanned and unpredictable manner.

There is also an almost infinite variety of what I’m calling “companies” — collectivities that are willed into existence, for a purpose.

Nations and peoples are primarily organisms, rather than willed associations. Who could ever have imagined a land of the Canadas or a United States of America as they exist today? But beyond recognized borders of their respective lands, they are largely imagined, and not inclusive: Not everyone within the boundaries belongs.

Towns and cities are the most interesting organisms because they’re real. The limits might be vague, but they’re measurable: There are ways to determine the point where dense proximity ends. For the most part, a townsperson or city dweller belongs by simply being there.

It’s not quite so neat and tidy, of course. What is willed inevitably becomes systemic. Things get out of control. Systems become oppressive, exclusive or routine. Nevertheless, all the ways and means by which human beings do things are artificial — i.e. cultural. A large organism like a nation, a city, a movement or a major legacy corporation may be beyond anyone’s control, but they are all our doing nonetheless.

Deliberate association may be the defining element of modern life — more definitive, I think, than that ever-shifting cluster of behaviours social science types abstract as “capitalism,” which, if and when it actually exists in any form, is more like an organism: unforeseen, unintended, out of control, but human nonetheless.

Those original “companies” that played such a major role in creating the land of the Canadas as well as the settler republic down below were formed deliberately, for relatively simple purposes: to share the risk, but also the potential profit of foreign adventures: The London or Virginia Company, Plymouth, Massachusetts Bay, Hudson Bay, Honourable East India, Company of One Hundred,  Dutch East India, Dutch West India, British West India, French West India, Danish West India — the list goes on and on.

Atlantic European colonialism, and through it, much of the modern and contemporary world as we know it, began through the adventures of private, for profit corporate entities with exclusive rights and privileges established at the pleasure of, and for the benefit of, monarchs who were considered the embodiment of their respective realms and peoples.

For the private investors, the purpose was to share risk on highly speculative adventures, to earn as much exchangeable currency as possible, and to shut out overlapping interests by securing exclusive rights, permissions and by making deals of various kinds.

They were like guilds: associations designed, in part, to corner the market, and, ideally, eliminate it altogether. That has always remained the dominant pattern: Every for-profit corporation is a conspiracy against a free and open market.

The charters that recognized and legalized their existence granted privileges and set limits. Ultimately, the aim was to enrich the realm under which the company operated, thereby rendering it more secure against rivals and enemies.

The public aspect of chartered private companies remains part of the basic organizational landscape to this day. They are part of the order of things, and ostensibly are still allowed to exist in order to serve the public interest. The tendency, however, is to think of such entities as independent, dedicated to the will and the interests of those that have a share in it, and to equate this unintended and largely imagined independence with “freedom”.

The end result is what might be called Kochism, which in its purest form means no bishop, no king, no nobility, no realm beyond private and shareholder holdings, no commons, no public other than a formless, abstract “society” or “market”to serve as a kind of corporate happy hunting and gathering ground, and ultimately, no government, and until then, as little government as possible.

But let’s set the big picture and the long view aside, for now.

Part of what I’m trying to get at here is the dominance of the private for profit corporation in how people think and imagine what can be done.

“Non profit” usually signifies do-gooder groups engaged with benevolent work led by the privileged and the powerful. The general conception is that the charitable sector operates as a complement to the main order of business in the corporate world.

The fact is, for-purpose and public enterprise have been around for much longer than the modern limited liability, for-profit corporation, and have played a much greater role in the evolution of modern realities than is generally acknowledged.

For-purpose enterprise is as significant as ever: If we take the latest, and maybe last, field of endeavour in which the United States has been dominant — the rise of digital technology — my guess is the organizational structures that made it all happen are the military; institutions of higher learning; tinkering by individuals or small groups, and for-private profit corporate enterprise, more or less in equal proportions.

The fact is, the private interest, for-profit model is of limited utility if the purpose is to do something that could make the world a better place.

Private and public interests can, at times, be harmonious, but those interests need to be meticulously and constantly attended. But because private interest corporate model is so dominant, combining for-profit and for-purpose is usually an unequal yoke.

Because the quest is market dominance, exclusive territory, privileges, long term contracts, mergers, acquisitions, restrictive patents and copyrights, large for profit corporate organisms are in many ways antithetical to free and open enterprise. And yet, that’s where the attention and the action is, to the point where the model threatens to dominate all other forms of deliberate organized endeavour.

As the standard corporate model expands, for-purpose enterprise form and practice have been stagnant or in recession. The time is ripe for innovation and experimentation in this field, on its own terms, without confusing or conflating it with for-private profit corporate forms and practices.

A large organism like a nation, a mass movement, a disruptive tech behemoth, or a dominant legacy corporation may be beyond our control, but they are all our doing nonetheless. They are not part of the natural order of things: People created them, and they exist for the good of their members, of the places where they are chartered to operate, and of humanity as a whole.

And whether its for profit, for good, or for fun, it is all business — i.e. busy-ness.

The world as it exists today is, to a very large extent, our doing, and therefore our collective responsibility.

So “what can a poor boy do”  — in particular, an old white settler Canadian of Atlantic European origins with no professional, religious or political affiliations?

Well, a good way to begin might be to look for company, be good company, join good company, gather companions, or form companies for doing what needs to be done.

Rapper Michael “Killer Mike” Render was thinking along similar lines when he said, at a critical point in the Black Lives Matter awakening, that Black Americans could “have freedom in an instant” if they “plot, plan, strategize, organize and mobilize.”

In other words, the logical next step after a massive assembly, is to get organized.

The right of assembly, as exercised by the Black Lives Matter March, and its corollary, freedom of association, are inseparable, and equally fundamental.

In the U.S. Constitution, the right of assembly is part of the First Amendment, which, along with freedom of religion, speech and the press, mentions “the right of the people peaceably to assemble and to petition the government for a redress of grievances.”

It is significant, I think, that the primary association with the right to gather is the “peaceable” qualifier, and that it is paired with petitioning the government to correct an action.

The Founding Fathers of the republic next door seem to have protests in mind, which is logical in a place born in protest — beseeching the government to remedy various grievances — and turning to armed revolution when their prayers to their sovereign were not answered.

Canada’s Charter of Rights and Freedoms specifies both freedom of peaceful assembly, and freedom of association, perhaps because there is a general sense here in the True North that it is safe to do so.

In a revolutionary republic, these are dangerous concepts. In a federated state founded on the idea that, should a government get out of line with self-evident truths, people can and should rise up, dissolve the bonds of law and order, and allow a new order take charge.

For a neo-loyalist, deeply attached and committed to Ontario, the nation, in the land of the Canadas, the true path is closer to a “thousand points of light”. That’s the idea that Peggy Noonan wrote up for George W. Bush, and that Donald Trump finds so baffling, but without equating the light to private, non-governmental, voluntary, unremunerated benevolence.

We can shine in any way that promises the best result, alone or in company, including all together as citizens of a town, a city, a province, a nation, or a confederation.

Because human beings are so diverse,

and because true freedom means being able to pursue whatever each of us are called or inspired to do,

and because no sociologist, political scientist, urban planner, economist or think tank can ever have all the answers,

and because the powers that be and their defenders are armed with weapons of personal, widespread and mass destruction,

while a solidified, aggressive, disruptive, revolutionary, ideologically consistent effort is likely to fail, and bring death and destruction in its wake.